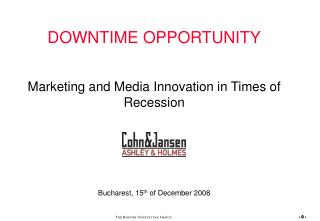 2008 Recession - . in 2008, the us went into a recession recession: a period of economic decline, usually characterized

Bucharest, 26 th of April 2017 - Isp group presentation for conference: “how can romanian entrepreneurs take their

Marketing in a Recession - . non-profit network. with less. do more. marketing in a recession. survival guidelines

Customer Centric Retail Innovation - Bucharest May 29, 2008 - This is a second keynote alain thys gave at the retail

Timeline of Marketing Innovation - Take a journey back in time - marketing time, and check out when the biggest invents