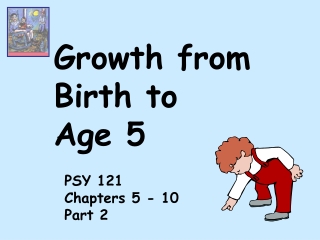 Chapter 5: Understanding Children Birth -Age 2 - . leq. what is the physical development of children in the first 2 years

From birth to twelve - . development in a nutshell. primary prevention principles. cach works from a primary health care

From Conception to Birth - . objective: tswat analyze the factors involved in the processes of fetal development,

Birth and Growth - . birth (parturition). 38 weeks of gestation is described as “full term” gentle contractions of

Assessment From Birth to Three - Preparing the family. introductory letter, warm and welcominghelp parents know what to

Development From Conception To Birth - . conception occurs when a sperm and an ovum unite. a zygote (0-14 days) is

Changes from birth to adulthood - . physiology: cognitive milestones month 3-5: attends to and reaches for objects month

Play From Birth to Eight Years