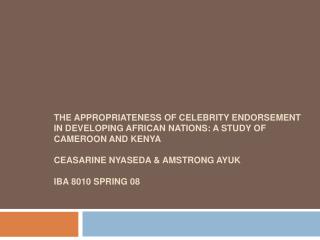 The Boost or Bust Factor of Celebrity Endorsement - . by: mark sampang valerie fry. boost factor. adds personality to the

Games in developing nations - . things to consider. legal – some countries have different laws to western nations.

Agriculture in Developing Nations - . a

Poem used as the theme of - Tang short stories made an important stride in the development of chinese ... to rework on

In this paper - For more classes visit tutorialoutletdotcom in this paper, you will analyze and discuss small business

The Sociology of Celebrity - . popular culture fall 2013 robert wonser. what are celebrities?. celebrity is the site of a

Women as the Face of Healthcare in the Developing World - Http:// www.usaid.gov /sites/default/files/ nodeimage /

The problems as seen in practice - . the s olution “individualised patient discharge tool - ipdt”. ipdt is an