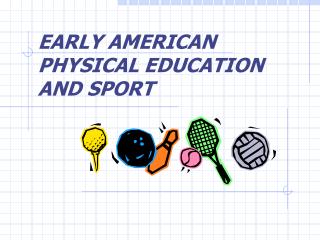 Competitive Cheerleading - . by: hannah. definition of a sport. sport is defined as a physical activity that is governed

Historical Studies in Physical Education and Sport - . our times and our attitudes, our games and our sports are shaped

A Tactical Games Approach to Teaching Sport Skills - . why use a tactical approach?. critics of traditional teaching of

Chapter 6: Biomechanical Foundations of Physical Education and Sport - . what is the value of biomechanics for physical

Chapter 8: Sociological Foundations of Physical Education and Sport - . how is sport a socializing force in american

Chapter 10: The Changing Nature of PE &amp; Sport - . today’s class focus is on physical education in the schools