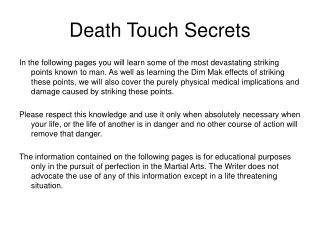 Please respect this knowledge and use it only when absolutely necessary when your life, or the life of ... purposes only in the pursuit of perfection in the Martial Arts. ... GOOD TOUCH/BAD TOUCH - . how to tell the difference pre-k thru third grade. developed and designed by mary jo sampson,

GOOD TOUCH/BAD TOUCH - . how to tell the difference. developed and designed by mary jo sampson, revised by bisd

Touch - . by: ibrahim allam. what is touch. touch defines boundaries with the environment. the sense of touch is actually

Touch - . nino rawhey. touch . “blindness”. if you ask a blind person what vision is he will not have an answer.

Touch - . why does touch matter?. makes us better communicators vital to our physical and mental health. essential to our

TOUCH - . how touch research can aid design. bruce montgomery june 2010. how can touch aid the design process. are we in

Touch - . by: hayley, jennifer, anton. essential questions. can you explain an example of touch or skin related disorder?