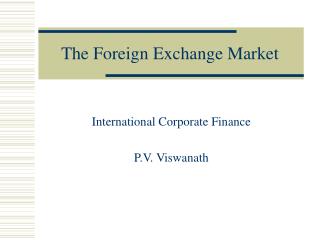 The forex market is an electronically linked network of banks, forex brokers and dealers. Trading is done by phone, telex or SWIFT (Society for ...

Ch.7 Price-Taking Market - What is a market? market( 市場) is a system governed by a set of rules or customs( 習俗)

The Foreign Exchange Market - . international finance. dr. a. demaskey. learning objectives. what is the foreign exchange