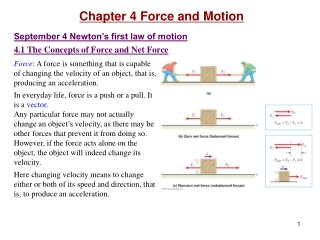 Chapter 4 Force and Motion September 4 Newton’s first law of motion 4.1 The Concepts of Force and Net Force. Force : A force is something that is capable of changing the velocity of an object, that is, producing an acceleration.