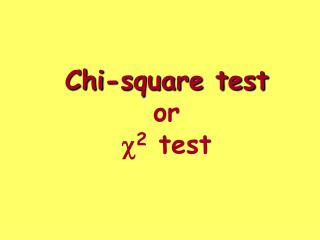 Chi-square test or c 2 test. What if we are interested in seeing if my “ crazy ” dice are considered “ fair ” ? What can I do?. Chi-square test. Used to test the counts of categorical data Three types Goodness of fit (univariate) Independence (bivariate)

Is An ECG Test And Why It Is Need To Be Done? - Ecg stands for electrocardiogram that records the electrical activity of

Chi-Square as a Statistical Test - . chi-square test: an inferential statistics technique designed to test for