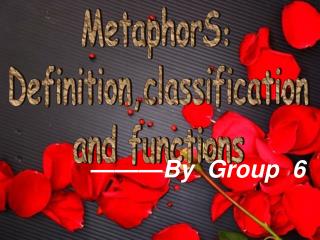 Metaphors and Similes - . playing with words. believe it or not, you use metaphors and similes every day of your life!

Figures of Speech/ Metaphors in Language - . a source of d epth and range in poetry alexis gruber, tim kunst , daniel

“Myself in Metaphors” - . writing poetry. “myself in metaphors” joseph o. legaspi. if each stand of my hair was a

Metaphors - . lesson 2 – figures of speech. metaphors. metaphor comparison between two unlike things that does not use

1.4 Functions - . objective. determine whether relations between two variables are functions use function notation and