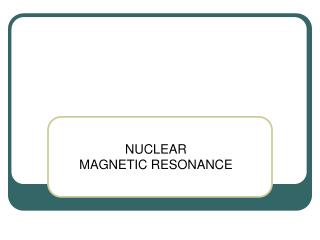 NUCLEAR MAGNETIC RESONANCE. Nuclear magnetic resonance (NMR) is the spectroscopic study of the magnetic properties of the nucleus of the atom. The protons and neurons of the nucleus have a magnetic field associated with their nuclear spin and charge distribution. .

MAGNETIC PARTICLE TESTING - . introduction. this module is intended to present information on the widely used method of