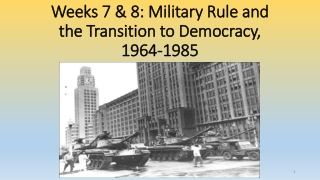 Weeks 7 & 8: Military Rule and the Transition to Democracy, 1964-1985. The military step back in. Military coup, 31 March – 1 April 1964 Congress purged but not closed Divisions from beginning between “hard-line” and moderates (“ castelistas ”, under Castelo Branco )