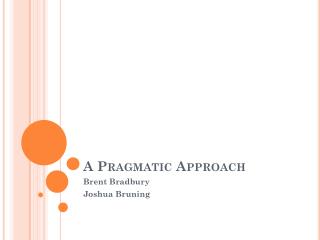 Outsourcing Rehabilitation: A Pragmatic Approach to Opportunities and Strategies - . alliance rehab-sra/sra mission and

pragmatic - . (adj.) practical he is a pragmatic person; he’s going to look for a job that will bring him a lot of

CLASSROOM MANAGEMENT : A PHILOSOPHICAL APPROACH with a smidgen of pragmatic strategies - . we teach who we are. our