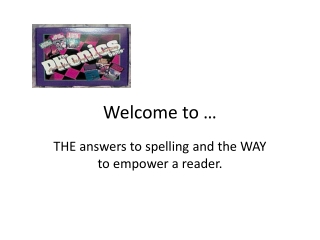 Welcome to …. THE answers to spelling and the WAY to empower a reader. The Plan and the History. Who said ‘older is wiser’?. 21 years old Company believes that ‘playing’ games is one of the fastest ways to learn. By the way – wiser – when ‘s’ is surrounded by vowels it makes a /z/ sound.

A story with no words.

Pictures with words - . poetry techniques and tools . figurative language or figures of speech. simile – a comparison

Working With Words - . in a balanced literacy classroom. by leigh daley. goals of the www block:. learn to read and spell

Working with Words - . journalistic style. why are words important?. words are tools a writer uses media depends on words

Words with prefixes, suffixes and base words - . boudreaux/reeves. delightful. something that is very pleasing.

WORDS WITH CHARACTER - . adjectives. what is an adjective?. an adjective describes the quantity or quality a noun.

E-F-G Words - . (not to be confused with the “effing” words...sorry). ellipsis. that series of three periods which

Words with Short a - . unit 1 transparency