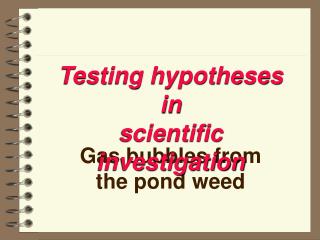 Gas bubbles from the pond weed Testing hypotheses in scientific investigation Observation Bubbles coming out from the pond weed. These are oxygen bubbles produced by the plants during photosynthesis. Betsy was not convinced of this explanation.

Pond Weed Remover - Contact us for pond weed remover. our eco-friendly equipment and gears will clear your pond easily

Pond Weed Identification - There are many varieties of lake weeds. find out which weed you're dealing with, and which

Update from The Pond - . founded by the business roundtable with support from the robert wood johnson foundation. greg

Reflections from Across the Pond - . by stephen calkins professor of law and director of graduate studies wayne state

Hot Gas in Bubbles and Superbubbles - . you-hua chu robert a. gruendl martín a. guerrero university of illinois at

The Pond - . by: ignacio perez michelle hornedo michelle fucile. rules. the class will divide in 4 groups. wait until we

Bubbles - . matt, mike jack. dutch tulip bubble. -happened in 1637 -people payed way to much than they should of like

BUBBLES!! - . must wear goggles at all times! no taking straw out of the dish! no drinking/ inhaling bubble fluid

Beyond the Bubbles: - . negotiating an educational partnership with a soft drink giant. a college cafeteria is not going