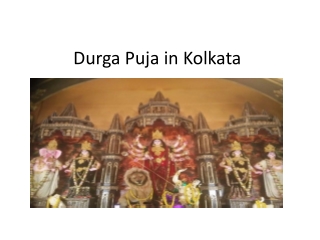 Durga puja or Sharodotsav as it is known in Bengal is the annual invocation and worship of the supreme Mother Goddess or Shakti. The festival is a five day affair. Its beauty and versatility lies in the fact that the religious affair is not restricted to a particular community or group of people. In Bengal it is a sort of carnival where every person residing takes part and enjoys the festivities in some way or the other irrespective of their caste, creed, and religious obligations.
The ecstasy, the madness, the flamboyance, and the craze surrounding this festival of durga puja, the biggest annual festival of the Bengalis, knows no boundsu2026.
Contact:
Mercury Tour Operator.
https://www.mercurytouroperator.com/durga-puja-parikrama/
Call: 8902495917, 8910339427
207/171, B.T Road, Kolkata 700036 About Durga Maa and Significance of Durga Puja - The goddess durga, called hindus as the 'destroyer of evil', is

Best ways of celebrate durga puja - We will get that fun through online durga puja,if you are interested please visit our

Latest Silk Saree Collection for Durga Puja - When it is about women's wardrobe, silk sarees has held a very special

Stitch your favorite Outfit for the Coming Durga Puja - Durga puja is a great time to experiment, give free reign to the

Hire a cab service in Varanasi on this Durga Puja - Like kolkata, durga puja is celebrated with great pomp in varanasi.