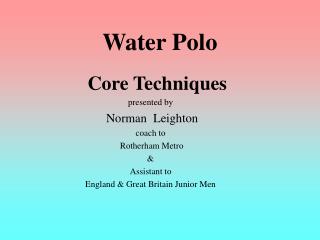 Water Polo - . an introduction. who plays water polo?. there are boys teams and there are girls teams. people play from

BULLDOG WATER POLO - . by: andrew pipes #4. about us. we have been in existence for about 6 years we are consistently

Water Polo Assessment - . by: sarah tamplin. number of people who got it correct. possible reasons for missing. #6: the

Water Polo Tournaments - SFA Now - Water sport is an established sport that is played in the water between two teams.

Polo - . by toby otorubio. history of polo. polo is said to have originated in china about 2,000 years ago the name of

Polo - Volkswagen. das auto. polo. reason of the research. it determines the manner in which a potential customer is