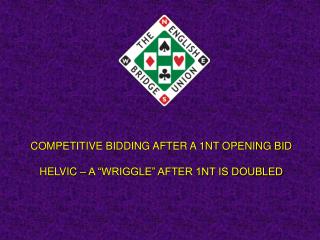 COMPETITIVE BIDDING AFTER A 1NT OPENING BID HELVIC – A “WRIGGLE” AFTER 1NT IS DOUBLED. “wriggling” after the opening 1NT is doubled.

Competitive auctions - . avoiding potential competition. keeping your opponents out of the auction is critical t0

Improver Lessons - . leads and discards. plan your opening lead. why? watch bidding – what is it telling you? start

“Sand Castle” - . wriggle. when you wriggle , you move your body back and forth, as you do when you are squirming.

Guidelines for Requesting a Waiver from Competitive Bidding - . procure to pay services updated 2/1/2012. table of