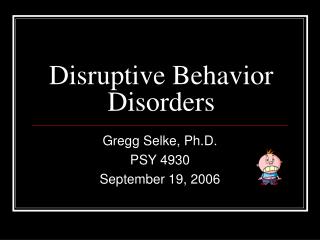 Abnormal Behavior or Psychological Disorders - . content as per college board abnormal behavior 7-9 %. what is normal?.

Emotional &amp; Behavior Disorders - . rebecca white. definition and criteria. it is hard to tell the difference…

Disruptive Behavior - Level of concern. low. moderate. high. no direct threats made 1 st time i have had concerns

Behavior and Emotional disorders - . by shay martin february 13,2010. defined as. the inability to learn that cannot be

TREATING DISRUPTIVE BEHAVIOR IN PHYSICIANS - Establishing a need for comprehensive interventions: issues with