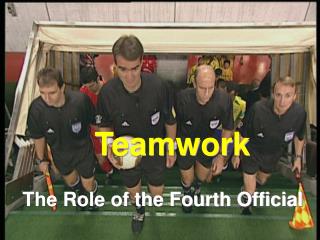 Teamwork. The Role of the Fourth Official. General Mechanics. Performs any other duties which the referee requests Primary point of contact between the referee team and all persons other than the teams Performs duties under and with the authority of the referee

Teamwork - . the role of the fourth official. general mechanics. performs any other duties which the referee requests

TEAMWORK - . how do you work with others?. why teamwork?. in order to be a productive and effective team, members at all

Teamwork - . know each other strengths and weaknesses schedules preferences compete with other groups with each

Teamwork: - . what’s trust got to do with it?. trust is absolutely fundamental to getting anything done…. in

Teamwork - . what is teamwork?. “when you're part of a team, you stand up for your teammates. your loyalty is to them.

Teamwork - . teamwork - the process of a diverse group of individuals pooling their resource and skills to work

Teamwork - . chapter 18. teamwork. over the past two decades, the use of teams has increased dramatically in response

TEAMWORK - . teamwork. team =&gt; 2 or more people who share a common goal and are working toward that goal. god has

TEAMWORK - . the role of teams in engineering, the aspects of group work and development as experienced by our team last

TEAMWORK - . are more heads better than one?. teamwork. what is a team? teams are groups of people who deal with problems