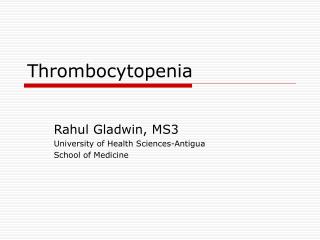 Thrombocytopenia - . itp. platelets. platelets are an important component in the first phase of hemostasis - platelet

THROMBOCYTOPENIA - Platelets. released from megakaryocytes under the influence of flow in capillary sinusesnormal

Heparin induce thrombocytopenia - . presented by the american society of hematology, adapted in part from the: american