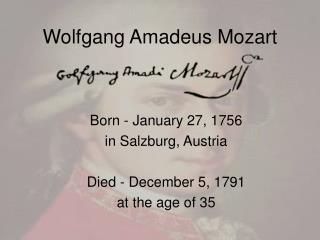 AMADEUS - . a ntikaon m atter a t d a  ne: e xperiments with u nraveling s pectroscopy. 32 nd meeting of the lnf

PATHOGENINAKTIVIERUNG - . wolfgang r. mayr. the safety of blood transfusions has improved over time. current measures to

Wolfgang Amadeus Mozart - . a musician that changed the world ’ s view on music. his legacy will live on forever as his