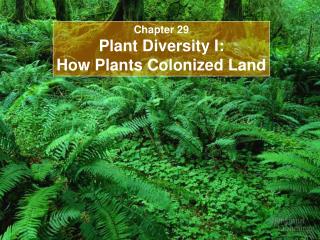 For this method the proteins Ag85A and B were - Figure 3: top figure shows the polytope construct where the linkers and

What it’s Like to Be Ancient - . is perception “ top down ” or rather “ bottom up? the famous picture here

Chapter 29 - . plant diversity i how plants colonized land. plants are classified in 4 main divisions (aka phyla)