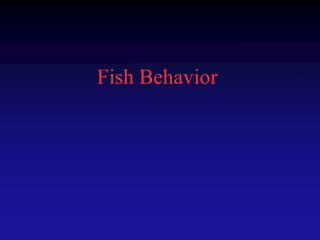 Fish Behavior. Animal Behavior. Action or re-action to stimuli Happens in the brain (non-motor) and can be manifested through muscular response, but often involves both There can be a temporal component to the actual behavior (learning, e.g. feed training)

Fish Behavior - . yes, this is a wonky angle. territoriality. it’s a fun word most fish are not territorial those that

Fish - . all fish have gills. with out gills they will die. the gills help them breath. fish have scales to cover the

Fish - . by: camden. fish live in watr.fish eat minnows.some sharks eat fish. i wish they wouldn’t do that. i like

Fish - . what are fish?. fish are aquatic vertebrates (animals with backbones) with fins for appendages.   they

A review of Fish Movement - . first. remember what each of the fish fins or fin pairs does?. caudal (tail) fin- -