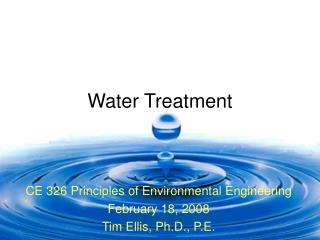 Module 5 Water Treatment On completion of this module you should be able to: - . be aware of the objectives of water

Wastewater Treatment - . on completion of this module you should be:. aware of the public health aspects and goals of

Wastewater Treatment - . purpose: to manage water discharged from homes, businesses, and industries to reduce the threat