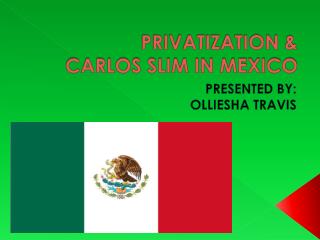 PRIVATIZATION & CARLOS SLIM IN MEXICO. PRESENTED BY: OLLIESHA TRAVIS. WHAT IS PRIVATIZATION. Privatization is the incidence of process of transferring ownership of business from the public sector to the private sector. TYPES OF PRIVATIZATION.

PRIVATIZATION &amp; CARLOS SLIM IN MEXICO - . presented by: olliesha travis. what is privatization. privatization is

México! - . by carlos &amp; catalina. location. this is a map of méxico! their capital is méxico city. méxico is

The Impact of Privatization in Post-Communist Countries - . presented by saul estrin department of management 13 th april

AFRICA PRIVATIZATION FORUM 2005 - . stability and sustainability of the privatization process in african sub-regions.

http://healthonlinereviews.com/garcinia-slim-fit-180/ - When it matches garcinia slim fit 180, reading the fine print can

http://www.usadrugguide.com/hl-slim-pro/ - Hl slim pro losing weight is more than something you try for a couple of weeks

http://www.crazybulkmagic.com/hl-slim-pro/ - Hl slim pro taking a multivitamin could be effective in the assistance of

http://www.fitwaypoint.com/regal-slim/ - Regal slim has lots of uses, but it will never replace it. he's making a list