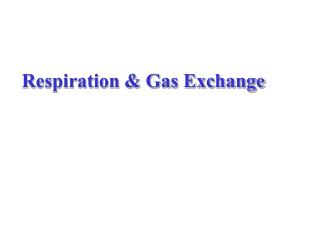 Respiration & Gas Exchange. Gas exchange is the uptake of molecular oxygen (O 2 ) from the environment and the discharge of carbon dioxide (CO 2 ) to the environment. While often called respiration, this process is distinct from, but linked to, the production of ATP in cellular respiration.

Internal and External Respiration Gas Transport Regulation of Respiration - . once we get the air into our lungs- we have

Factors Affecting Rates of Respiration - . temperature - for every 10 degree c rise in temperature between 0-35 c the

ENERGY &amp; CELLULAR RESPIRATION - . metabolism. sum total of all the chemical reactions within an organism.