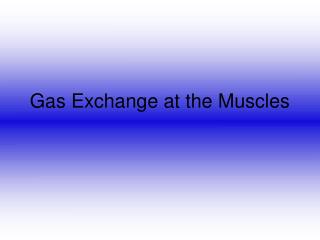 Gas Exchange at the Muscles Gas Exchange at the Muscles

Muscular System - . structure of muscle. individual muscles are separated from other muscles and held in position by

The Columbian Exchange - . one of history’s great turning points!!. exploration led to an enormous exchange of people,

6.4 Gas Exchange - ★distinguish between ventilation, gas exchange and cell respiration. ★explain the need for a