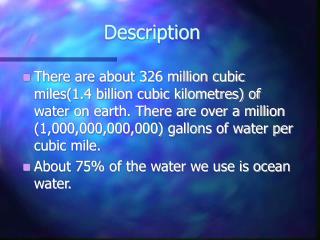 Description. There are about 326 million cubic miles(1.4 billion cubic kilometres) of water on earth. There are over a million (1,000,000,000,000) gallons of water per cubic mile. About 75% of the water we use is ocean water. The sea otter mostly lives in brackish water.

Description - . hello, we’re aitor and belén and we’re going to describe each

Description - . unit one english 1301 hammonds-french. using the senses. jot down some phrases to describe the image….

Description - . jelly fish can come in all shapes and sizes. they are called jellyfish because their bodies are wobbly

Description: - . planting corn and legumes: later in this unit students will examine genetic biodiversity and test for

Description - . fortunately, the driver had caught it with both of his cargo straps when he secured the load to the

Description: - . goals:. describe the concept of the trophic levels distinguish between food chains and webs. define