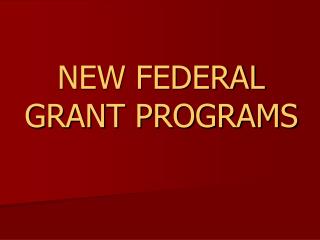 FEDERAL PROGRAMS - . what a parent needs to know. decatur county school system achieved accreditation by sacs during the

FEDERAL PROGRAMS - . objects and functions. what object code is used to purchase supplies and materials?. answer. what

Federal programs conference - What is formhog?. a web-based tool that documents may be uploaded into so they can be