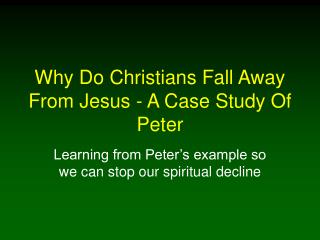 Why Do Christians Fall Away From Jesus - A Case Study Of Peter. Learning from Peter’s example so we can stop our spiritual decline. Introduction. Much rejoicing when someone is baptized into Christ Grieved when, all of a sudden, same person falls away from the Lord

Why Do People Fall Away? - . common reasons why people fall away. a lack of commitment and conversion from the start: the

Why Do Some New Converts Fall Away? - . causes of new christians falling away. persecution (matthew 13:20-21) riches

Why Do Christians Suffer? - Battle cry ministry reading club presents…. bcm. the brook dried up. why do christians

Describe a mature disciple Why do so many fall away from faith as young adults? - Why are some non-pentecostals more

Why do I fall? - Compiled from bro. zac poonen’s bible study materials. why do i fall?. no fear of god no faith in

Why Do We Fall? - . getting better through…. relentless and deliberate practise exposure to better getting it wrong and

Why Should Christians Study The Old Testament? - . why study the old testament?. the need to correctly understand the

A Christian can fall away - . can one who falls away return? yes! there are numerous examples in the old and new

Why Do Christians Kneel When They Pray? - . and it was so, that when solomon had made an end of praying all this prayer

Why Jesus Did Not Reject Apostle Peter? - . 31 and the lord said, simon, simon, behold, satan hath desired to have you,