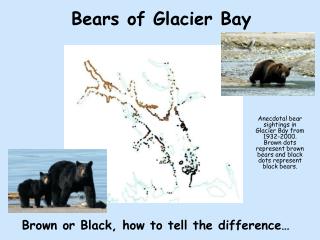 Bears, Bears, Bears! - . about the bears. bears that i have. links where i got my info. contact me. our mission

Glacier Basics - . an introduction to where, how, and why glaciers form. what is a glacier?. large mass of moving ice

THE GLACIER - . a glacier is a mass of ice that is formed on land in consequence of the compaction and recrystallization