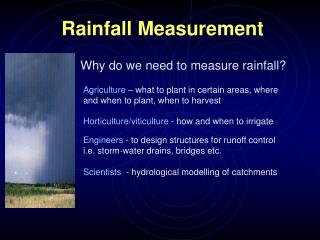 Rainfall Measurement. Agriculture – what to plant in certain areas, where and when to plant, when to harvest. Horticulture/viticulture - how and when to irrigate . Engineers - to design structures for runoff control i.e. storm-water drains, bridges etc. Why do we need to measure rainfall? .

Rainfall - . presented by: group- d. introduction. this presentation explains about the variability of rainfall in

Rainfall - . lo – to be able to explain how it rains. by the end of the lesson: all pupils must have produced a

Excess Rainfall - . reading for today’s material: sections 5.3-5.8. excess rainfall . rainfall that is neither

Convectional rainfall - . by r yan and holly. stage:1 the sun’s emit’s ray’s of heat, the warm the earth surface .

Rainfall Types - . convectional rain. during summer days the earth’s surface can becomes very hot. this can cause an