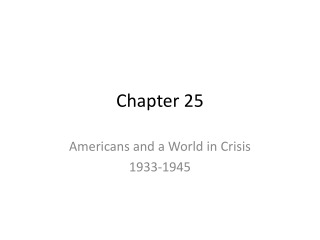 Chapter 25. Americans and a World in Crisis 1933-1945. Introduction. 1.) How did President Roosevelt’s Good Neighbor Policy affect U.S.-Latin American relations? 2.) How did the American people and their govt. respond to the international crises of the 1930’s?