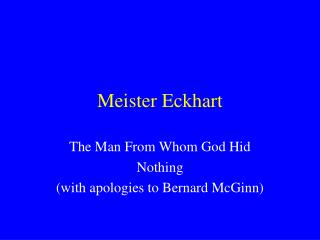 Meister Eckhart The Man From Whom God Hid Nothing (with apologies to Bernard McGinn) A Most Unusual Man The lesemeister: A “reading” master was a scholar who had memorized an impressed number of quotations and arguments. Meet Eckhart Tolle - What this book teaches . the development of self"awareness and consciousness (spirit) =

Photo: Susan Meister/ UMCOR - Volunteers who travel to the westbank station in new orleans are invited to buy a special