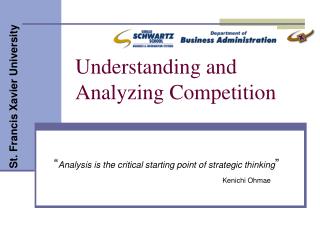 Understanding and Analyzing Competition. St. Francis Xavier University. “ Analysis is the critical starting point of strategic thinking ” Kenichi Ohmae. Objectives and Overview. Objectives To introduce the topic of competition and a tool for analyzing and understanding competition

Analyzing a Play - . determine the style of the play. the style can be divided into:. realistic. realistic plays center

Perfect Competition - . chapter 11. perfect competition. the concept of competition is used in two ways in economics.

HIV - . human immunodeficiency virus. what is hiv? what is the difference between hiv &amp; aids? what are

Holcim Award for sustainable construction. - The holcim awards is an international competition of the holcim foundation