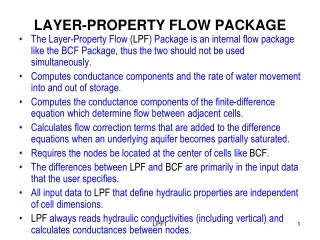 LAYER-PROPERTY FLOW PACKAGE. The Layer-Property Flow ( LPF ) Package is an internal flow package like the BCF Package, thus the two should not be used simultaneously. Computes conductance components and the rate of water movement into and out of storage.

Data Link Layer Flow and Error Control - . flow control. flow control specifies the amount of data can be transmitted by

Write the name of each layer What is an important property of that layer? - . absolute time. radiometric or isotopic

Layer 6 Presentation Layer - . overview. now that you have learned about layer 5 of the osi model, it is time to look at

Effect of Pressure Gradient on the flow in a Boundary Layer - . x. z. boundary layer equation:. pressure gradient is