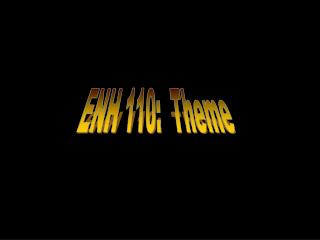 ENH 110: Theme. Definition. Theme: it is the controlling idea or central insight of a piece of fiction. It is the unifying generalization about life stated or implied by the story. It is often synonymous with a story’s purpose. Theme exists only (1) when an author has seriously

Thanatopsis - . by william cullen bryant. thanatopsis: literary focus: theme. the theme of a poem is what the poet is

Night by Elie Wiesel Theme: Silence - . marlee maraugha. “where is god now?” and i heard a voice within me answer