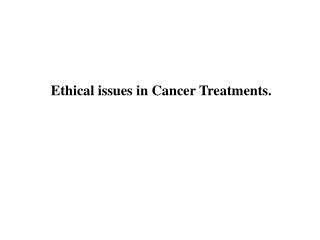 Ethical issues and cancer screening - . efficacy. the extent to which a specific intervention, procedure, regimen, or

Cancer Treatments - . jessica davies and connie holm. surgery. surgery can be used to diagnose, treat, or even help

Ethical Issues… - . is human cloning ethical? “playing with nature?” does a clone have parents? autonomy? might

Ethical issues - . alecia swasy wrote an article in wall street journal about some problems in the company the

Ethical Issues - . primary duty. “the primary responsibility of counselors is to respect the dignity and to promote the

Ethical Issues - . role of the qualitative researcher. basic assumptions about how research should be conducted.