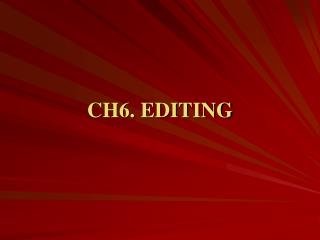 CH6. EDITING. What is Editing?. Editing is the process by which the editor combines and coordinates individual shots into a cinematic whole. “ For my vision of the cinema, editing is not simply one aspect, it is the aspect ”.... Orson Welles. What does an editor do?.

RNA Editing - . definition : any process, other than splicing, that results in a change in the sequence of a rna

Welcome to - . what will we be doing this year?. videography. we will learn a basic operating understanding of digital

Peer Editing - . getting the most out of your editing time. what is peer editing? . a peer is someone in the same class

The Editing Game! - . can i play, too?. that sounds like fun!. the editing game. directions: find the mistakes in the

Word Tutorial 1 Creating and Editing a Document - . objectives. create and save a document enter text and correct errors