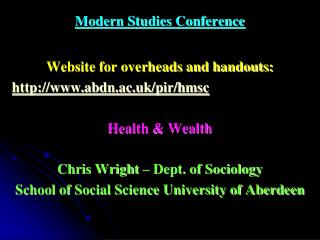 Modern Studies - . social inequalities in the usa - health. introduction - health. unlike the uk, there is no nhs in the

National Modern Studies - . the usa today. usa – a diverse country and population. aim : examine the composition of the

Higher Modern Studies Assignment - . worth 30 marks out of a total of 90 for the course – 33% of grade the marks gained

National 5 Modern Studies - . what you need to revise for the exam: all topics in preparation for knowledge questions

Modern Studies in S3/4 - . what is involved?. modern studies at standard grade is based on a number of key concepts.