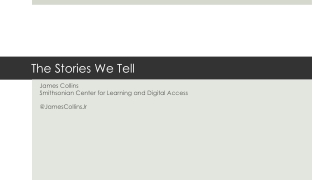 Presenter: James Collins, Digital Media Project Manager, Smithsonian Center for Learning and Digital Access Every gem, artifact, and painting in a museum contains a story. How do we make games that do justice to our collections? How do we make games that go beyond teaching skills to teach an understanding of the world? Let’s rediscover the art of playful storytelling. Reflections on the Stories of The Quran - . في رحاب قصص القرآن. يوسف. stories of the quran قصص

THE BEST OF STORIES - . life of the prophets. by salifu baba . learning outcomes. at the end of this session participants

SCARY STORIES - . stories to chill your heart and thrill your senses!. scary stories to tell in the dark. are you brave

Short Stories - . something glimpsed from the corner of the eye, in passing. vs pritchett. definition: short stories.

Creating and Using Stories - . plan for today. introducing myself man in a hole why use stories island story using an

2. Enter Controversial Stories - . that’s the key to winning awards. what would newspapers be writing about your

Read Full of Emotions Romance Stories - Alter Stories - There are several people who are tempted to read romance stories,