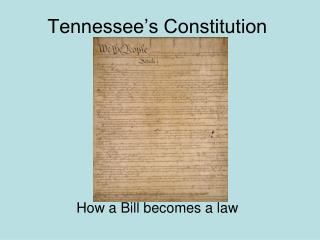 Tennessee’s Constitution. How a Bill becomes a law. The State of Manufacturing in Tennessee - . prepared by matthew n. murray center for business and economic research the

The ABC’s of Housing Assistance in Tennessee June 10, 2013 - . this presentation serves…. …..to provide the

Tennessee williams - “then and there the theatre and i found each other for better or for worse. i know it’s the only

The State of Tennessee - . by jenna sanford. the southeast. tennessee is located in the southwest region. volunteer

Tennessee Natives- Treasures you can help protect - . by: melissa sandrene and jeff simmons. freshwater fauna of

Tennessee The Volunteer State - . by jessica kelzer. tennessee’s statehood. june 1, 1796. tennessee is in the southeast