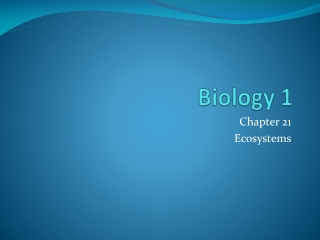 Biology 1. Chapter 21 Ecosystems. Do Now. Which of the following shows the organizational level of a biome from the broadest category to the most specific category? A . biome  population  community  ecosystem  o rganism Biology 1 - . study guide 2.3, 2.4. what are the four biomolecules?. carbohydrates lipids proteins nucleic acids. what is

Biology 1 - . chapter 5 how cells work. what is energy?. capacity to do work forms of energy potential energy kinetic

Biology 1 - . worksheet i. question #1. what does the first law of thermodynamics state? energy cannot be created or

Unit 1: Biology - . objectives : i can … explain the goals of science and the function of scientific instruments

Biology Quiz #1 - . on a loose piece of paper please write the answers to the following questions. true / false. humans

Intermediate 1 Biology - . human health food and a healthy body. the need for food. why do we need to eat food? why must

Chapters 1 BIOLOGY - . hamilton high school science department mr. sears . what is science ???. the knowledge of what we