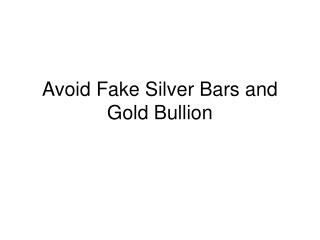 The way to test silver bars and gold bullion for sound velocity is by using ultrasound. Ultrasound testing of silver and gold for sound velocity is affordable and can be done conveniently in your own home. To find about the technology and how it can save investors and dealers from being defrauded by counterfeit gold and silver, visit http://testyourgold.com/. Buy Rare Gold Bullion Bars Online - If you have been looking at rare coin prices, you have probably noticed that the

Gold, Silver and Platinum Bullion Dealers In Texas - Texas bullion is one of the country's most trusted gold, silver and

Prime Bullion- Dealers of Premium quality Gold and Silver - Prime bullion, auckland is one of the most reliable suppliers

Selling your Silver Bullion - When you are looking to offload your silver bullion, it will be worth your while to take

Buying Gold Bars - Locating the very best way to acquire gold can be a job. you will certainly learn some info that will