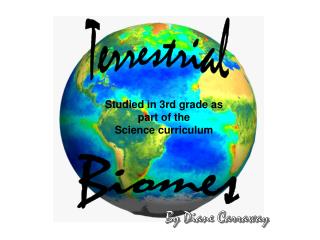 Terrestrial. Studied in 3rd grade as part of the Science curriculum. Biomes. By Diane Carraway. Land Biomes. Scientists divide the Earth based on the distinctive plant and animal species that live in a region. This region also has a specific climate.

Terrestrial Biomes - . warm-up. what is a biome? give an example. why do different parts of the world, with similar

Terrestrial Biomes - . biomes- community in a food web all adapted to particular abiotic conditions . so, the

Savannah (Terrestrial) - . by katie bell and olivia solley honors biology mr. z. climate. the climate of the savanna is

Terrestrial Biogeochemistry - . the study of the biological, geological and chemical factors that control the