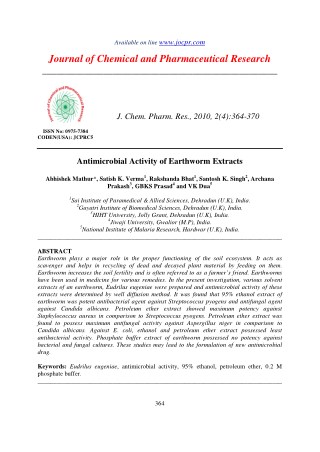 Earthworm plays a major role in the proper functioning of the soil ecosystem. It acts as
scavenger and helps in recycling of dead and decayed plant material by feeding on them.
Earthworm increases the soil fertility and is often referred to as a farmer’s friend. Earthworms
have been used in medicine for various remedies. In the present investigation, various solvent
extracts of an earthworm, Eudrilus eugeniae were prepared and antimicrobial activity of these
extracts were determined by well diffusion method. It was found that 95% ethanol extract of
earthworm was potent antibacterial agent against Streptococcus pyogens and antifungal agent
against Candida albicans. Petroleum ether extract showed maximum potency against
Staphylococcus aureus in comparison to Streptococcus pyogens. Petroleum ether extract was
found to possess maximum antifungal activity against Aspergillus niger in comparison to
Candida albicans. Against E. coli, ethanol and petroleum ether extract possessed least
antibacterial activity. Phosphate buffer extract of earthworm possessed no potency against
bacterial and fungal cultures. These studies may lead to the formulation of new antimicrobial
drug. Antimicrobial Activity of Herbal Plants - . by sanjay singh. http://powerpointpresentationon.blogspot.com. what are

Earthworm - . decomposer found under railroad tie near gravel road pinkish purple and soft and squishy gets its energy