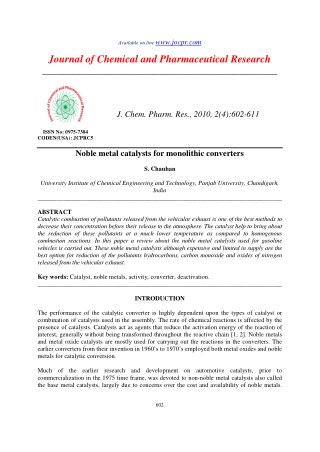 Catalytic combustion of pollutants released from the vehicular exhaust is one of the best methods to
decrease their concentration before their release to the atmosphere. The catalyst help to bring about
the reduction of these pollutants at a much lower temperature as compared to homogenous
combustion reactions. In this paper a review about the noble metal catalysts used for gasoline
vehicles is carried out. These noble metal catalysts although expensive and limited in supply are the
best option for reduction of the pollutants hydrocarbons, carbon monoxide and oxides of nitrogen
released from the vehicular exhaust. Fuel Cell Catalysts Based on Metal Nanoparticles - . 4.5.2011 taina rauhala. contents. introduction to fuel cells why use

Catalysts - . s1 chemistry introduction to chemistry. where do you find catalysts?. they are chemicals which speed up

Catalysts - . catalyst-lowers activation energy of a chemical reaction and is neither a reactant or product. so what’s

Catalysts - . rates of reactions. a catalyst is… . a substance that alters (speeds up or slows down) the rate of a

Catalysts - . a presentation by will churchyard olly sullivan. what is a catalyst?. a catalyst is a substance which

Catalysts - . may 6 2011 sch4u1. catalysts. a catalyst is a substance which speeds up a reaction without being used up