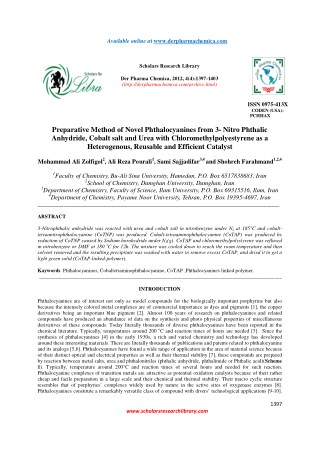 3-Nitrophthalic anhydride was reacted with urea and cobalt salt in nitrobenzene under N2 at 185Â°C and cobalttetraanitrophthalocyanine
(CoTNP) was produced. Cobalt-tetraaminophthalocyanine (CoTAP) was produced by
reduction of CoTNP caused by Sodium borohydride under N2(g). CoTAP and chloromethylpolystyrene was refluxed
in nitrobenzene or DMF at 180 oC for 12h. The mixture was cooled down to reach the room temperature and then
solvent removed and the resulting precipitate was washed with water to remove excess CoTAP, and dried it to get a
light green solid (CoTAP-linked-polymer). Phthalic Anhydride Market Forecast to 2020 - The global market for phthalic anhydride is expected to reach usd 10,387.5

Quantitative determination of Urea (Berthelot Method) - . urea is the end product of protein metabolism.it is produced