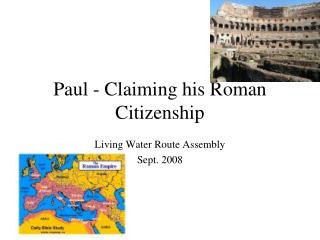 VI. Roman Citizenship - . all free males are a citizen, and therefore protected by rome right to vote right to make

Roman Citizenship versus Jewish Identity! - . what have the romans ever done for us….!. essential vocabulary. citizen:

PAUL &amp; HIS LETTERS - . the genuine letters of paul place and time of the composition of the pauline homologoumena

Paul and His Letters - . timeline. major events in the life of paul according to acts. student of rabbi gamaliel (called

PAUL AND HIS EPISTLES episode - . jonathan dizon. “i, paul”. scribes &amp; companions. when necessary, use words.

Poor Paul and his terrible day - . your friend paul was feeling lazy yesterday, and decided to skip class. unfortunately,

Between The First And Second Roman Captivity (63-67 A.D.) During his first Roman imprisonment, Paul expected to be rel

Claiming Versus - . creating value. the information problem. competitive tactics to claim value can make the other party

The Roman Poet Martial: His Life and Times - . by professor r. gentilcore. martial is depicted in an english aquatint

Tactics for claiming - . influencing perceptions. opening offers. make the first offer, if you are prepared hard versus