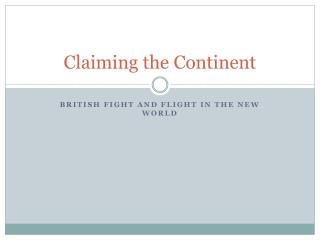 Claiming the Continent. British Fight and Flight in the New world. Problems in the Colonies. Disease Relations with the Indians Food Supplies Winter. Sir Walter Raleigh. Aristocrat who wanted to get rich quick Gained money from Queen Elizabeth to start a colony CLAIMING THE FUTURE - . the association of the future. working definition statement. a baptist association is a community

Claiming Versus - . creating value. the information problem. competitive tactics to claim value can make the other party